Welcome to our school website - please come in and take a look around. Do you know our six school values? They are co-operation, respect, determination, gratitude, honesty and kindness.

Things you could do at home this week:

* Have a go at writing the story of The Ugly Duckling. You may want to write the start, the middle or the end. You may even want to have a go at writing all of it! First you need to think of your sentence and say it out loud. Next you need to write the words in the order that you have said then. Repeat your sentence out loud if you forget what you wanted to write. You should use the story map and keyword cards to help. I have also included a word mat so you have help to spell some of the words that come up in the story. 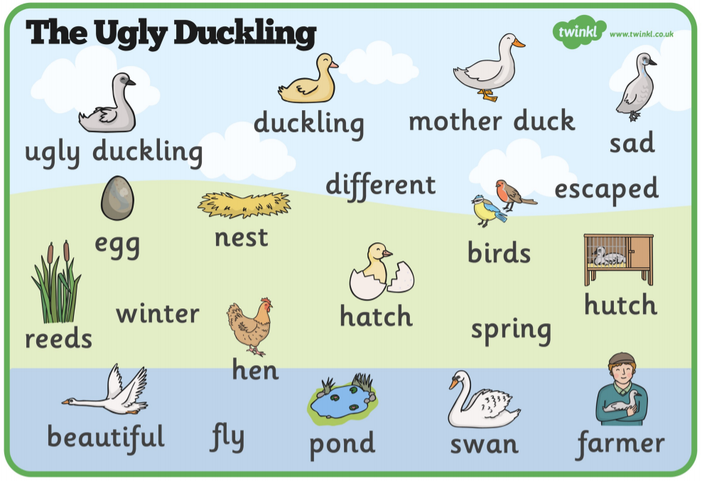 For a super challenge you could also add some extra describing words when writing about the duckling!

* Have a go at finger printing some ducks and swans. Here are a few pictures to give you some inspiration.

* Read another version of The Ugly Duckling story. If you don’t have the story at home I have attached a powerpoint of another version or you can search on YouTube. Compare the two versions, talking about what is the same and what is different. Which version do you prefer? Why?

* Have a go at continuing a rhyming string. Choose one of the words below and write a list of all the words that rhyme with it. How many words can you think of that rhyme?  You could also make the word with magnetic letters or letter cards and just change the first letter. Read the word and decide if it is a real word or a nonsense word.

* Create a fact file about a swan. You could include what swans eat, where they live, their life cycle, draw a picture of what swans look like as babies and adults, and anything else you find out when you are researching. If you would rather, you could create a fact file about another bird instead. Maybe one you have seen in your garden or when out walking, or one you have seen on the television and would like to know more about. I have included a ‘British birds’ powerpoint if you would like to find out some facts about birds that live in and around Bristol.